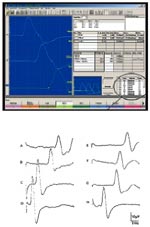 Neurophysiology is the study of electrical activity of the sensory and autonomic, central, and peripheral nervous system functions – dysfunctions of which are common in many neurological and general medical conditions. Quantitative assessment of these systems are essential diagnostic and prognostic tools, as well as being able to monitor progression and treatment. As well as being used in the clinic they are also useful in intensive care and intraoperative monitoring. They are also useful research tools.

Sensory evoked potentials are the electrical signals generated by the nervous system in response to sensory stimuli, which consists of a series of waves that reflect activation of neural structures along the particular sensory pathway. There is a range of techniques available to study the brain, the somatic, hearing and visual systems, these are electroencephalography (EEG), somatosensory (SSEP), auditory (AEP) and visual (VEP) potentials, respectively, as well as nerve conduction studies (NCS), which indicates the time for the signal to travel along the nerve, electromyography (EMG), which records the activity of the muscles. Diseases affecting the sensory nervous system may show abnormalities in the activity generated by one or more of the associated neural structures.